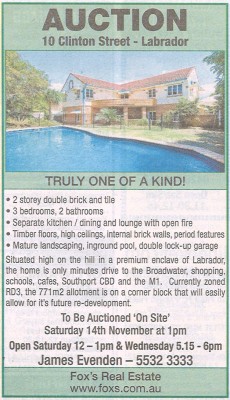 Well it was with some shock that opening up Saturday’s edition of the Gold Coast Bulletin and I found Fox’s Real Estate, a fully fledged Jenman Approved agency  advertising 10 Clinton Street, Labrador as an auction for sale.

It all seems pretty hypocritical to me but is that really surprising?

So is Jenman now Auction friendly? Are we about to see Jenman join the ranks of the Auction brigade?

Should the owner of this property be concerned that the agent selling their home actually believes that they will get less during this method?

Does anybody know any other Jenman Approved agencies conducting Auctions?

Will Today Tonight run a story on this change of heart ?

The auction is tomorrow at 1pm and because of Jenman’s hypocritical stand it has generated lots of interest in the real estate industry including the media.

More and more questions are being asked about this auction:-

Kevin Turner from RE Uncut has been conducting a range of interviews on the subject covering the story. I believe that neither Jenman, the salesperson or the principal are answering Kevin’s request for interview at the moment but quite a few people involved are. If anybody has Neil’s personal contact details and would like to share them it would be appreciated.

I think it’s incredible when a media whore gets shy when the subject turns back to himself in anything but a positive light. Maybe the cameras and a journalist will be chasing him down the road getting into his car zooming off.  With  his own personal experience  he is probably worried that his comments might be heavily edited and taken out of context and sensationalized like his  targets often claim.

Kevin will be running the story at  www.reuncut.com next Thursday and Friday and we will update the blog with the auction result over the weekend.

Unfortunately I did not return from Brisbane in time to make the Auction on the day but someone who was there has advised that they had 3 or 4 bidders with bidding starting at $300,000. The property was announced on the market at $550,000 and eventually sold at $600,000. I have not had a chance to double check the figures but this must give the Jenman group a 100% closure rate on their Auctions.

auctionsJenmanjenman approved
Tell us if you liked this content.

Towards the Holy Grail of HDR 3D Video